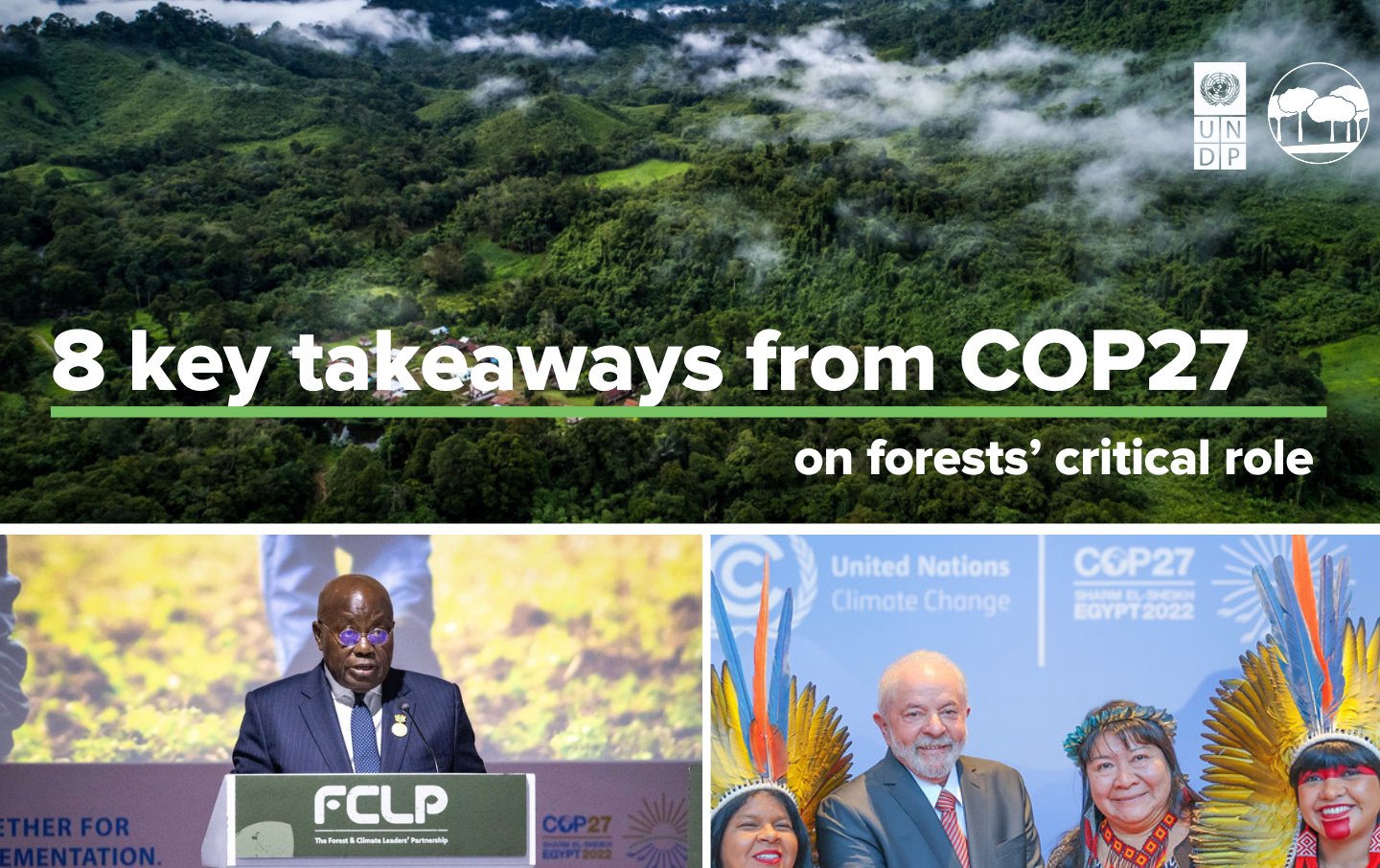 This year’s UN climate change conference hosted in Sharm-El-Sheikh, Egypt, featured important discussions on climate justice, climate finance and negotiations by over 200 countries on the state and future of climate action.

But what outcomes did COP27 bring for the world’s forests and forest communities? Here are UNDP Climate and Forests’ 10 key takeaways on forest action:

1. Launch of the Forests and Climate Leaders’ Partnership:

27 countries and the European Union launched the FCLP to follow-up the package of announcements at COP26 in Glasgow last year, where over 140 world leaders, representing over 90% of the world’s forests, committed to halt and reverse forest loss and land degradation by 2030 while delivering sustainable development and promoting an inclusive rural transformation. Backed by the UK COP26 Presidency, the FCLP held its first ministerial meeting at COP27, co-chaired by the USA's Special Presidential Envoy for Climate, John Kerry and Ghana's Minister of Land and Natural Resources, the Honourable Samuel Jinapor.

As Roselyn Fosuah Adjei, Director of Climate Change at Ghana's Forestry Commission and sherpa to the Ghana FCLP co-chair said at the session hosted by UNDP: “The FCLP is not about creating new projects and programs. Instead, it provides a platform for support to already ongoing action within countries towards achieving the Glasgow Leaders’ Declaration on Forests. It also provides the global support needed for forest countries to achieve our deforestation-free targets and maximize development outcomes.”

This was emphasized by Chris Dragisic, Senior Climate Change and Land Sector at the US State Department and also a co-chair sherpa, who said: “the FCLP is an opportunity to create a process, that builds on models from other sectors, to elevate the issue to a political level – creating accountability for commitments already made, but also looks at gaps in the space where we can work collectively to launch new actions towards the 2030 goals.”

Another important takeaways was expressed by Marleine Saïra Flora Nguie when she addressed world leaders during the launch on November 7th, underlining the importance of recognizing the role Indigenous Peoples’ as guardians of forests, and that sustainable development wouldn’t be possible without their knowledge and contribution.

The Government of Germany is providing funding to UNDP, as interim financial manager, as the FCLP establishes its governance arrangements and program of action for 2023.

Watch the full recording of the FCLP launch at the World Leaders’ Summit here.

UNDP’s Climate and Forests Programme hosted a session at the UNDP Pavilion at COP27 featuring both co-chair Sherpas of the FCLP,the COP26 Presidency’s lead for the partnership, and Marleine Nguine. Find out more here.

The issue of high-integrity voluntary carbon markets was a hot topic at this year's COP, specifically for its potential to rally the world towards more ambitious climate action and to expand Africa’s access to the climate finance needed to implement Nationally Determined Contributions (NDCs) across the continent.

A roundtable hosted by the Children’s Investment Fund Foundation, in collaboration with UN High Level Champions and the VCMI, focused specifically on understanding the current state of business in Africa today, while recognizing the enormous need to capacity-build in a holistic, comprehensive and unbiased manner. UNDP and Climate Focus discussed their findings from supporting countries develop VCM Access Strategies and presented their proposal for an African Carbon Markets Access Facility.

This need was echoed by African women leaders at the UNDP Pavilion on November 14th during a session that focused on harnessing carbon markets to advance NDCs.

Forest carbon represents 75% of the carbon market opportunity in Africa. If held to high-integrity principles, voluntary carbon markets can unlock a significant source of finance for Africa's tropical forested countries to implement their NDCs. However, it also represents a risk if REDD+ results are not considered to meet internationally recognized standards of high-integrity carbon credits.

Read the Climate and Forests team’s latest blog with important takeaways from the session here.

The Forest Declaration Assessment launched its first regional assessment focused on the 6 Congo Basin Forest countries during COP27. The report covers progress and challenges in conserving the second-largest tropical forest in the world - a crucial source of biodiversity and massive carbon sink.

This report also follows the new Global Assessment, launched in October this year. Answering, “Are we on track for 2030?”, it covers progress towards four themes: overall goals to halt deforestation and increase restoration; governance; finance; and sustainable production and consumption.

The Congo Basin holds the second-largest tropical forest in the world and the largest intact forest landscape. The region's forests are an important carbon sink for regional and global ecological and climate regulation, a biodiversity hotspot, and home to 60 million people for whom the forests represent essential natural resources and cultural heritage.

The report clearly outlines that the conservation, restoration, and sustainable use of the Congo Basin forests must be at the center of regional and global climate efforts, especially if we are still keen on keeping global warming below 1.5ºC by the end of the century.

Last year, UK’s DEFRA provided a £3M contribution to UNDP's Climate Promise to assist countries in fulfilling the Glasgow Leaders’ Declaration on Forests through their national climate pledges. This includes support to direct grants for Indigenous Peoples’ contributions to NDCs, with calls for proposals recently launched in Ecuador and Kenya. The additional contribution of £6M pounds, announced at COP27, will continue support to countries to increase ambition and accelerate implementation of their forests, land and nature targets under the Paris Agreement.

There is no credible response to the climate crisis that does not involve protecting and restoring nature. 92 percent of climate pledges include forests and other land uses, and many forested developing countries also explicitly refer to the important role of REDD+ in their NDCs.

A critical pillar of this work is delivered through UNDP’s Climate and Forests Programme, with support from its Forest Declaration Partners – Climate Advisers, Climate Focus and Meridian Institute. More information can be found here.

Strong commitments from Brazil to reach zero deforestation were made during the summit. Luiz Inácio Lula da Silva (Lula)’s speech at the summit unveiled that Brazil recently announced a rainforest alliance with Indonesia and the Democratic Republic of the Congo.

Lula also expressed that Brazil will create a "Ministry of Indigenous Peoples" to ensure "dignity, peace, sustainability" for land defenders.

“There is no climate security for the world without a protected Amazon,” expressed Lula in his speech, “We will spare no efforts to bring deforestation and the destruction of our biomes to zero by 2030.”

Brazil, Indonesia and DRC are home to 52% of the world’s remaining primary tropical forests, which are crucial to avoiding climate catastrophe.

The COP27 cover decision includes food, rivers, nature-based solutions, tipping points and the right to a healthy environment for the first time, which is a step in the right direction for forest solutions to the climate crisis.

PLANT, officially launched at the UNDP Pavilion at COP27, consists of a comprehensive digital dataset with national and subnational information from 56 forest countries. The tool helps countries analyze opportunities to enhance the contribution of the forest sector to NDC mitigation targets.

It also allows countries to track their reporting commitments under the Paris Agreement.

PLANT will be used by UNDP’s Climate and Forests Programme to develop carbon market access strategies for forest countries, and it will allow UNDP to advocate for more financial resources to achieve the goals of the Paris Agreement, following a data-driven approach.

This tool is constantly being updated and improved through the cross-referencing of publicly available data and its validation by international experts across various sectors.

Find out more here to learn more about the launch.

Check out the first quarterly global report featuring latest analytics from the tool.

8. Launch of The Indonesian Environment Fund

During COP 27, IEF hosted a side-event in the Indonesia Pavilion on REDD+, which delved into existing investment, action and contribution. IEF followed this immediately with a “Donor and Investor Gathering” summit  in Bali to share how it would mobilize more blended climate finance and disburse these effectively.

IEF is collaborating with UNDP to disburse proceeds these proceeds through an innovative performance-based payment modality, which builds on and strengthens existing REDD+ priorities of the Government of Indonesia.

The Indonesian Environment Fund was established to manage multi-sourced funds that will be channeled to support the achievement of NDC and SDG targets. A healthy and functioning environment is the right of every citizen of Indonesia.

While the need and potential to upscale private and public finance for climate change mitigation through carbon markets has been widely acknowledged, many pledges on net-zero targets that include the use of markets have been questioned and subject to claims of  greenwashing.

To make sure non-state actors’ climate pledges contribute to credible global mitigation efforts in line with the Paris Agreement, several initiatives have been working on providing guidance and supporting efforts to enhance accountability, transparency, and integrity.

In early 2022, the UN Secretary General established a High-Level Expert Group on the Net Zero Emissions Commitments of Non-State Entities, which launched its report on “Integrity Matters: Net Zero Commitments by Businesses, Financial Institutions, Cities and Regions’’ at COP-27. This report provides key recommendations and a pathway to set up and implement credible net-zero targets and scaling up climate action by non-state actors.

Given the high degree of interest in the forest sector, when it comes to non-state actors’ engagement in carbon-markets, this report, together with other initiatives promoting and guiding high-integrity carbon markets, are an important steppingstone to maximize the sector’s mitigation contribution in a transparent and credible manner.