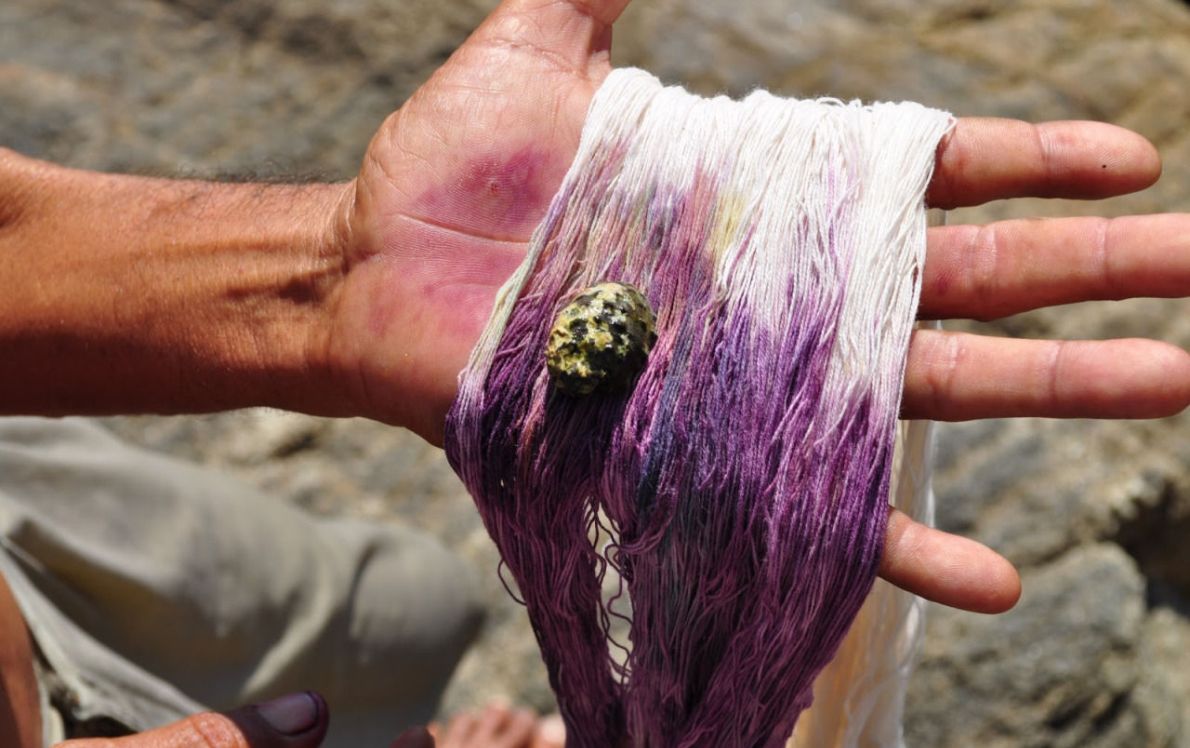 That purple, which is obtained from the snail, is not just a color, it is years of stories and community work that we transform into fabric, as I always say, it is wave collective resistance.

The Boruca indigenous territory is known for its masks; carved and embellished with an impeccable and incredible artistic sense with magical features and colors. This territory belongs to the Brunca[1] people that stand out in the 2017 Declaration of Intangible Cultural Heritage for their most important ritual: The Game of the Little Devils, about the historic battle between indigenous people and Spaniards.

The fabrics are a cover letter for the Brunca people. The woven belts stand out, with threads that are slowly intertwined by instruments that indigenous women know very well. From the sowing of cotton, to showing off a woven bag at a party accompanied by the accordion, there is a long, long journey. Many long journeys.

Each one of the cotton dyes is narrated by the grandmothers and grandfathers, who not only differentiate the colors of the raw material and how to turn it into thread, but also have references on how to paint the dyes, how to turn the skeins into skirts, on how to create details and measured elegance.

According to the grandmothers, with every waning moon, the Boruca habitants made a journey from their traditional houses to the beaches nearby on the southern Pacific coast, to carry out one of the most ancient practices of Brunca people, also recorded by the Chorotega brothers and sisters in the northern zone of Costa Rica: the snail-based thread painting known as múrice or surem is.

Every March, the feat consisted of going down the Rio Grande de Térraba, collecting shells, salt, and different foods. Already in the boats, in addition to the indigenous women and men, were the prepared skeins of cotton and the spindles that give life to the finely tuned thread. Arriving at the beach meant sleeping under the light of nothing but the stars, burning logs to harvest salt. The nights were spent commemorating the ancestors and sharing memories of previous visits to this place.

The milky solution extracted from the snail known as surem-is or múrice involves speed and a complex technique, including moments of great danger, since the waves break on the rocky shore. Already here, with coiled thread in hand, trying to avoid the slippery stones, the men locate the snails, surprise the animal, which in reaction releases a substance that is placed on the thread. Upon contact, the purple color does not stand out, as it appears only after being washed by the women with sea water and dried in the fulminating sun of the beach.

Different shades were reflected in the petticoats worn by Brunca women, after having worked with the purple fiber.  Others, on the other hand, exchanged them in barter to obtain other products. Thus, returning home, to the land of ashes, they brought joy.

Although now the journey is not made as it was before, the existence of the surem is[2] - which has been sheltered in the Marino Ballena National Park since 1992- speaks to the intrinsic relationship between this indigenous people and their historical territory, a bond that continues to exist, since thread is still painted in the company of even young people. This knowledge is the fruit of the cultural survival of a collective body that has in its memory the ancestral practices related to areas of cultural importance.

In recent years, exchanges and spaces for conversation have been generated that acknowledge the existence of a community protocol for the ancestral uses of the Bruncájc people of this area of ​​the coast, together with alliances with the administration of the Marino Ballena National Park. In this journey, UNDP accompanies the institutions through an operational plan that responds, among other aspects, to actions focused on cultural strengthening, and that includes preserving this practice as a unique element in Costa Rica.

Slowly, but in the right direction.

Opening the possibility of these spaces for dialogue makes it possible to recognize and validate traditional indigenous knowledge in consensus with protected area management systems. These are not incompatible efforts, but rather as complementary visions. Walking this line together ultimately adds up to leaving no one behind.

[1] The translation of bruncajc is ‘land of ashes’.

[2] In the surem text, surem-is and múrice refer to the snail used to paint the thread.

[3] Although biocultural rights do not stand out in international law, there are instruments that warn of the existence and importance of these relationships between the environment and local communities, to mention two substantial ones, the Convention on Biological Diversity and the Nagoya Protocol.